Picture this, it’s cold outside, it’s been snowing, the roads are a slushy mess, you really just feel like staying inside for the weekend, and you bought too many bananas that ripened too quick and now you need to make something with them. Well lucky me, I don’t even have to picture that because it’s my current situation! I think the snow is my karma for mentioning something about an “easy winter” yesterday.

But truthfully I was sitting on a surplus of overripe bananas, and I wanted to make something fun instead of just sticking them in the freezer. Now banana bread is perfect on it’s own, but picture it with swirls of caramelized cinnamon and sugar, now that will get your attention. I think I’ve made just about every version of banana bread under the sun… Chocolate chip, Walnut, White Chocolate Pistachio, Raspberry Chocolate, Pumpkin, I even did a Rum & Cardamom Banana Bread which was as amazing as you’re probably thinking it was.

The possibilities are really endless, lately I’ve been really into combing two recipes into one. Think strawberry shortcake banana bread, gingersnap macarons, or snicker doodle rice krispie treats. Again, endless possibilities. Whatever you weekend baking plans may be, I highly suggest taking a minute to whip this cinnamon swirl banana bread together, nothing beats a freshly baked, piece of warm banana bread with layers of caramelized cinnamon and sugar.

I mean does that delicious sugary, cinnamon swirl not get you excited? Before this even went into the oven, I knew the recipe would be a keeper! I often find myself experimenting with new things when I bake, which can be risky! But I never write down what I do as I go, so then when I get a gem like this, I have to really think back on how much I added and of what.

I since then, have started writing down what I do as I go, so I don’t have to do it again to get a no-fail recipe everyone can use! You know how it goes, once you start getting into that creative zone, you just keep going. I really like to find good base recipes, for instance a good base banana bread recipe, like the one here, The Very Best Banana Bread. That I can than spice up with different flavors and textures! I think every home or restaurant chef needs a good arsenal of basic starter recipes.

If there is one thing that spoiled me the most throughout culinary school and working in restaurants, it would have been having an endless variety of ingredients. Cooking at home, I would never buy an ingredient that I would only use a teaspoon or two of. While in a restaurant, I could go into the walk-in or pantry and come out with an array of unique ingredients that would “enhance” my dish. That just isn’t practical for a home chef, as much as I wish it would be, no one has the space or even the budget to house small jars and packages of ingredients they might use one every 6 months. So we improvise!

Preheat your oven to 350 degrees F, lightly grease and flour a 9″x 5″ loaf pan and set aside. Melt the butter and let cool slightly. In a large mixing bowl combine the melted butter and sugar, whisk vigorously to combine. Add in the vanilla extract, and the eggs, one at a time. Whisk again to combine.

Carefully sift in the flour, baking soda, and salt, fold in until completely incorporated. Gently fold in the mashed bananas. In a small mixing bowl, combine the white sugar, brown sugar, ground cinnamon, and ground nutmeg, stir to combine.

Bake at 350 for 55-60 minutes, or until a toothpick comes out clean. Make sure that if the toothpick doesn’t come out clean, that it’s not that it was inserted into a pocket of delicious cinnamon sugar glaze. Bake for an additional 5-10 minutes if needed. Allow to cool on a cooling rack for 20-30 minutes, before removing from the pan. Slice and enjoy warm or keep in an airtight container for up to 4 days! 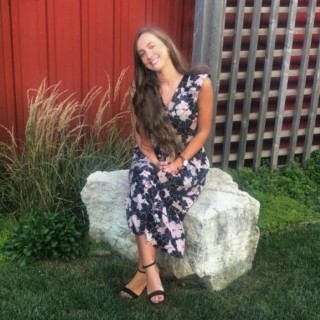 The founder of the Hearty Life, here you'll find a collection of fresh & inspiring meals, decadent desserts, and classic cocktails. I'm so glad you're here!

I’ve been on a muffin kick lately and these Chocolate Chunk Banana Muffins are some of my favorites! The bananas give these a great texture, they have a hint of spice, and are loaded with chocolate chunks! Better yet they can be made in one bowl and under 30 minutes!
New recipe • Oatmeal Cookie Sandwiches with Maple Ganache • If anyone needed a sign to make cookies - this is it! What could be better than two chewy oatmeal cookies sandwiched together with a little maple ganache 🍪
• Pretzel Dogs with Spicy Honey Mustard • These make a perfect addition to snack night or an easy weeknight meal & the spicy honey mustard is a must! 🌭
Happy Valentine’s Day all - even though we should love our people everyday of the year, I’ll take today as an excuse to share some cookie boxes! I was stuck between classic sugar cookies and shortbread cookies. I decided to make classic shortbread cookies, with a little freeze dried strawberry powder mixed in for some subtle color and flavor. 💕
New post up • 8 Ingredient Banana Bread • If you’re like me and don’t like your bananas once they start turning remotely brown, this recipes for you! This makes a great base recipe, mix in chocolate chips, chopped nuts, or frozen berries for even more flavor!
All this snow and cold has me thinking about fresh & colorful springtime recipes. It might not be spring yet, but you can still find all the ingredients to make this bright, flavorful Lemon & Herb Hummus!🍋

Looking for something specific?